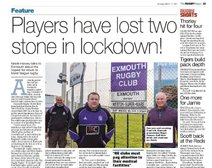 EXMOUTH RFC ~ HOT OFF THE PRESS

Article from The Rugby Paper

Please check out this great article from The Rugby Paper published on Sunday 14th March, penned by Neale Harvey. Coinciding with our 12 month anniversary of our last competitive games.

At the Imperial Recreation Ground in Exmouth stands a sobering reminder of when, exactly one year ago today, the onrushing coronavirus pandemic halted rugby across the country.
Exmouth Rugby Club’s first team had just beaten South West Premier rivals Weston-super-Mare 28-27 in a thriller to pretty much banish any fears of relegation, and yet instead of a post-match celebration, talk in the clubhouse afterwards quickly gave way to a sense of impending doom.

Twelve months on, the matchday sign advertising that great game remains on display, offering the starkest of reminders of a moment lost in time. Along with the rest of England’s 1,900 community clubs, the denizens of Exmouth are looking to the future with a degree of trepidation.

Community rugby remains on a knife-edge and Nick Smith, Exmouth’s director of rugby and a former Marine, speaks for many clubs below the professional level when he tells The Rugby Paper: “If we don’t start this September and it’s put off again, then I really do fear for amateur rugby. “Player-wise, we did okay to start with last year and actually got some good training in over the summer, with some touch tournaments. But then it all got knocked on the head again and I just don’t know what’s going to happen with the 29 or 30-year-olds who’ve had a year off.

“Their wives, girlfriends and kids have got used to having them about and with the gyms being closed as well, their bodies have lost their conditioning for rugby. Some of our guys have lost two or three stone, which is crazy, and I’m really not sure if they’ll all come back to the game.

“We run three senior teams, a colts side, minis and juniors all the way up from U5s, girls age groups at 13s and 15s – are they all going to come back? Colts is a struggle anyway numbers-wise and I’m worried about our second team as well because they play quite competitive rugby.”

Retaining player numbers is only part of the problem facing club officials at community level.

Every club has its own unique circumstances and Exmouth, situated as they are in a seaside town with their ground adjacent to the stunning Exe Estuary – hence their nickname, ‘The Cockles’ – would ordinarily aim to cash-in on the tourist pound and events on the nearby Rec.

Sadly, the renowned Exmouth Festival was recently called-off for the second successive May and chairman Ian Harris is battling to retain sponsors while keeping fingers firmly crossed that the route out of lockdown follows the government plan, enabling hospitality to resume.

Harris said: “After that Weston-super-Mare game, everyone was talking about coronavirus and the government were due to make an announcement. Almost jokingly, we were saying, ‘See you next season,’ but never did we think that a year later we still wouldn’t have played.

“At first, you’re thinking three months, maybe four, and we all thought we’d be playing again by last September. But here we are a year on and, like everyone, we’ve been hit hard because we rely hugely on hospitality through our clubhouse with parties, christenings or whatever.

“Exmouth Festival’s just been cancelled again and a lot of our sponsors are involved in hospitality and have had a tough time as well. We’ve had to accept that sponsorship revenue is down but we’ve had fantastic responses from our membership and I think we’re going to be okay.

“It’s been a challenge but we’re still smiling and we’ll come through this. We’ve been here 148 years and we’re aiming to celebrate our 150th in style in a couple of years’ time.”

In common with Exmouth’s hard-working officials, National Clubs Association chairman John Inverdale is banking on a smooth progression out of Covid-19 lockdown and solid summer building towards a full resumption for the 2021/22 season to breathe life into the community game.

However, Inverdale, who remains heavily involved at National Two Esher, whose last game was also on 14 March last year, shares Exmouth’s concern over players returning.
He told TRP: “Rugby clubs are generally optimistic about player numbers but at this moment I genuinely don’t know how that will look. I’m guessing here, but maybe you’ll find the 30-somethings who are going to stop at some point might just accelerate plans to do so.

“It will be interesting to see what the fallout is but one thing I do know is that with the likelihood that we’ll have a lot of people who haven’t played any serious rugby for 18 months, there’s a requirement by all clubs to pay attention to their medical facilities and be ready for it.

“Assuming things go okay, we’ll be able to play 15-a-side rugby with scrums and mauls from 31 May and I think some NCA clubs will play fixtures in June just to get their clubs and running again. If it breathes life into what’s been a moribund club for 12 months, then great.”

Financially, Inverdale confirms that 36 of the 48 NCA clubs applied for grants under the government’s winter survival scheme and he expects them all to resume come September.

He added: “I think most clubs are okay, I really do. Clubs are very well run and a lot have used their time to improve facilities – Rams being a notable one – and the vast majority have been able to cut their cloth accordingly and use this period to re-evaluate how they run things.

“It’s all about communication now, about getting the message across, involving everyone who was at the clubs before and impressing on them that we want to see them there again. A year of our rugby lives has gone missing and we’re desperate to get back on the touchline again.”

Back at Exmouth, groundsman Roger Holman is eager to paint those touchlines. He says: “Motivation has been my biggest issue. It’s been depressing coming down here and not seeing anyone so I left the Weston sign up as a reminder of when we stopped and what we’ve missed.

“I’ve been preparing the pitches as I normally do but the only things using them have been the Brent Geese who stop over here in the winter. I’m fed up with DIY now but there is some light at the end of the tunnel and, hopefully, we’ll get the lads back training now on 29 March!”

The Rugby Paper on sale each Sunday / LINK HERE FOR DETAILS