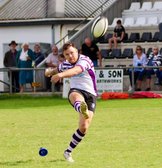 By Ian Harris
3 days ago
Share via
FacebookTwitter
https://www.exmouthrugby.co.uk

Away Win in Cornwall

In a game where the lead changed hands 6 times, you can guarantee that both sets of supporters were guessing the outcome until the 80th minute.

At their home in Launceston the Cornish All Blacks struck first when Lloyd Duke went over for a try on 7 minutes, the conversion missed when it hit the posts from close range. The Cockles returned the favour 4 minutes later when Dave Bargent scored the first of his brace of tries, George Mears missed the extras. Both sides were looking to play some expansive rugby, the pitch in great condition and on a warmer than expected day. After 15 minutes The Cockles took the lead through a barrelling try from back row, Max Keen. This time Henry Goldson took over the kicking duties and added the first of 3 successful kicks. 5-12. Both teams made excursions into the scoring zone however both defences held firm. Just shy of the half hour, James Harris took a ten minute break for a technical offence which allowed CABs James Tucker to slot 3 penalty points, scoreline 8-12. The home side also received a yellow card for Levent Bulut, just before half time.

Henry Goldson raced for a try just after the break, to increase The Cockles lead to 8-17, conversion missed from out wide. The strong Cockles travelling support could be forgiven for thinking this game was only going one way at this time. However, CAB’s Full Back Tom Sandercock raced in for a try 13-17, extras missed. On 62 minutes Launceston took the lead through Jamie Tucker, weaving his way through, who also added the conversion, 20-18. After building some great territory, Dave Bargent scored his second, under the uprights, following up some great interplay from Jake Inglis and George Mears, who delivered the scoring pass. Goldson converted, 20-24 to the Cockles. 70 minutes down surely that must be it. With 4 minutes remaining CABs worked the ball wide to the right and Rupert Freestone went over in the corner, Tucker missed the conversion, 25-24 with 3 minutes remaining. Both teams had secured their 4 try bonus point but it was The Cockles who finished the strongest. A catch and off load from a lineout, the Cockles forwards worked their way close to the try line, Barge and skip Jack Fahy just short, finally Gareth Walker burrowed his way over, Goldson kicked the final two points of the afternoon, 25-31.
A fine win in Cornwall. Exmouth have added to their squad this season, with debuts off the bench for youngsters Angus Meadows at scrum half with Liam Bayley at 2nd row. The overall squad performance would have pleased the Cockles coaching team, although there are always areas to work on for the next South West Premier outing. At home to Old Centralians from Gloucester on Saturday 18th September. Kick off at 2.30 pm.
_____________________________________________________

A Cockles Club team entertained Torquay 2nd Team on Saturday. Despite Torquay scoring first, they could not hold the strength and power of the Exmouth side. The Cockles ran out 33-8 winners. Exmouth 2nd Team start the defence of their Devon 1 Merit Table title on Saturday with a trip to Paignton.